Note: While we believe in designers being paid for their work, we are unable to sensibly split the earnings of this project. Instead, we ask you to donate to a charity that helps feed those in need, for example Feeding Britain or Voedselbank.

In this world, Divine Beasts roam the land. Delivered to us from otherworldly realms, they lord over the grounds they manifest on. They’re incredibly violent, are replaced in mere days after being removed, and are capable of supernatural powers.

Iera Entera (lit. 'Sacred Entrails') is a GM-led narrative RPG that follows a group of Worshippers - hunters and chefs that search the land for otherworldly beings and harvest their parts to make vital dishes for their local community.

Half the game is plotting elaborate traps to get a Divine Beast exactly where you want it, the other half is chanting prayers over its deep-fried claws and trying not to open a portal to hell by spilling the salt. It's Monster Hunter meets Overcooked.

This game was made by Nathan Blades and Ruben Ferdinand for the Attack and Dethrone God Jam.

I mentioned this game to a friend of mine and they ran it for a group of friends at a local pub. They said it was great fun! They were concerned about replay-ability, but it was not a hard sell in the slightest.

That's so fantastic to hear - please give them our thanks! It's definitely a game that lends itself to one-shots, but we've found it slots in well as a side story for campaigns in other Fantasy systems.

Hello! I am said friend :p I actually didn't know I had been mentioned and was here to check if there were any updates since the last copy I had.

I'm actually running it again, with some thought given as to replayability and basic fun. I thought you might be interested in the changes I'm making for this second run:

During the first part, I'm going to tie each skill roll to some kind of lore-building. Ex: If the player wants to use their knife skills, they need to create some NPC who will suffer unless this Beast is correctly killed, cooked and served. If they want to use Instinct, they have to establish some way this world is dangerous, possibly relating to the current Divine Beast hunt. I found that players focused too much on the dice rolls and TV's, (that it was at a pub and they were drunk was a contributing factor), to the point where they were eventually just ticking off steps on the recipe, so I wanted something mechanical to bring focus back onto the worldbuilding. At least for running at a pub!

For the second part, I'll be rejigging it fairly entirely. I might be missing something, but it seems fairly straightforward to just . .. start step 1, finish step 1, start step 2, finish step 2 . . . with no need for juggling plates. And if I take command, then the very small time windows fucked over the players. So I'm going to make it up as a restaurant service. They know they'll be feeding [x] hungry people, probably 40-50, I'll have to think about amount of time spent. Depending on their success in part one, they'll have enough ingredients to make [x]+5 or [x]+10 portions. They'll have a [y] minute lead time, I'm think 5 minutes per 'action' during this phase, so probably 30 minutes, and then the chits start coming in, determined by a d10 rolled every 15 min, with intentional "big tables" at an hour in, 2 hours in, etc.

They'll only have a certain number of kitchen implements to cook so many things at a time, chits need to be served in full by a certain period of time, dishes can only sit at each stage, including finished but unserved, for so long before being ruined, some amount of prepwork can be pre-done, kitchen implements and serving dishes need to be cleaned before re-use, there should be a lengthy blessing step somewhere in there, some "orders" will have modifications which need to be kept straight, and each stage of prep can do a certain number of dishes as one action. The blessing step will likely be "unlimited", but "cooking on the stovetop" might be 6 at a time, "as you only have 6 burners". The idea is a lot of little steps that are individually easy to accomplish, since the idea is juggling plates.

I'm going to keep the second part organized by writing each chit and each batch on index cards, and moving the batches of cooking dishes forward on a prep-track.

Since it'll be much longer, I need to reduce dice-rolling for the second part, so most of it will be done by pre-reqs, (ex: "2 or more bombast", "Exactly 1 Sharp"), rather than  by dice-rolling. I'm thinking you can challenge a pre-req you don't meet by rolling dice. I might also demand that each dish is "above par" by 1 or 2, meaning that the pre-req is exceeded in at least 1 or 2 steps, or if challenged, that either 1 critical success or 2  successes were made.

If you're interested in the changes I'm making, I'll let you know how it goes, and send you a copy of the write-up after my next game of it on tuesday. I have a pretty good idea of what I want to change right now, but I imagine it'll evolve more as I actually finish the write-up. 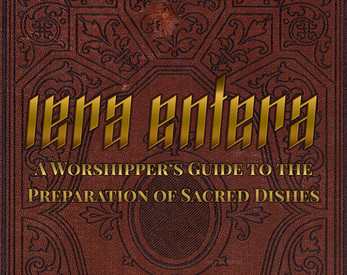 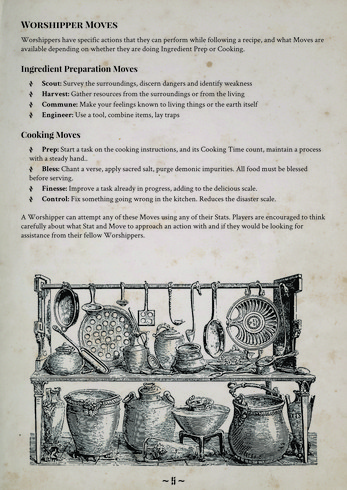